A bit of history ... industrial

It was in Châtellerault - a city renowned for its cutlery since the Middle Ages - that in 1819, Louis XVIII chose to set up a new weapons factory. In order to take advantage of hydraulic power, it was built on the edge of the River Vienne upstream of its confluence with the little Envigne River. At the time, the Factory consisted of workshops dedicated to the manufacture of cutting weapons and firearms. An administrative building completed the complex. Other buildings were added. with the development of the activity on the site, which lasted a century and a half.

Cavalry sabers, "Chassepot" rifles, then "Lebel" rifles, bayonets, machine-guns ... came out in great numbers from the Châtellerault workshops. The "Miossine" rifle, intended for the Russian army, was the main product at the end of the 19th century. The labour force varied enormously during the history: from thirty at the opening of the site, the factory had up to 8,000 employees during the Second World War. It was foe long the leading employer in the city until it closed on October 1, 1968.

The presence of the factory promoted the development of the suburb of Châteauneuf, as well as the construction of a bridge with innovative architecture - the Hennebique concrete process - in 1899. This bridge - listed as a historic monument and labelled “20th century heritage" - is named after the mayor of the city between 1896 and 1904, Camille de Hogues. 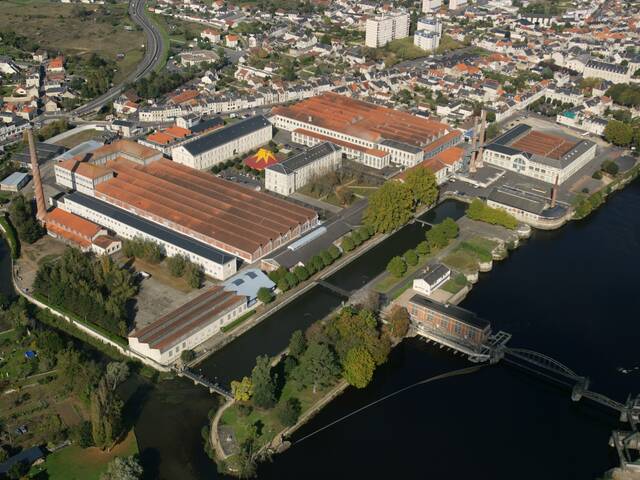 A multi-faceted site in constant metamorphosis

Four brick chimneys have been preserved on the factory site. The largest is 62 meters but the 45-meter twin chimneys still steal the show. Indeed, the two spiral ducts trace a very characteristic profile for the Châtellerault horizon. In addition, from the footbridge that connects them (the creation of Jean-Marc Vilmouth, in 1994), a unique view is offered to visitors.

The director’s house is also known as the clock building. The administrative complex now houses the Conservatory of Music and Dance of Clément-Jannequin (a master of polyphonic song in the 16th century, who was born in Châtellerault) - with a reputation for excellence throughout the Department. A quiet place not far from there, the garden of the director’s house is located at the confluence of the River Envigne, the River Vienne and the canal.

In the old blacksmith's shop, the hammers are silent. They gave way to an ice rink with a unique architecture and equipment also emblematic of a site in full revival. Nearby, the brand new Skate Park borders the river and offers fans of thrills a unique setting to have fun.

The workshop, built of dressed stone architecture, houses the Auto-Moto-Bike Museum since 1998. The collection is presented on over 3,000 m² and you can discover means of transport from 1818 to the present day: from the Bugatti 4CV through prototypes. You will also find the history of arms manufacture in Châtellerault.